Nature versus nurture, the age old question.  What determines behaviour, our DNA or our upbringing?  With the exception of a few out-liers, most would agree that it is some combination of the two.  Whether it is 60/40 or 40/60, or some other ratio; there is little doubt that both our socialization and our physical heritage makes us who we are.  Would there be any reason to think it would be any different with dogs?

This morning I did a little web research, looking at the last 5 years (2008-2012) of the US numbers of humans killed by dogs.  In the larger scheme of things, human deaths by dogs are fairly insignificant averaging only 27 per year.  Still the numbers are somewhat interesting.

In the last five years, there have been 133 deaths by dogs.  Of these deaths, 52% (69) were caused by pit bull type dogs.  If you include mixes, the number jumps to 62% (82).  Two out of every three deaths by dogs involve pit bulls!  While there are no hard numbers to indicate what percentage of dogs are pit bulls, a common number thrown about is 5% or less.  If we take the 5% number, then pit bulls are over represented in killing humans by a magnitude of 12 (although the actual number is probably higher).  These numbers do not even begin to account for those who are maimed or otherwise seriously injured, let alone the countless deaths of other dogs.

Those with an opinion on the issue come down hard on one side or the other, nature or nurture.  Are these dangerous dogs created by irresponsible owners or are they born dangerous?  Of course societal deviants with violent tendencies are more likely to own pit bulls and the pit bull was designed to kill.

Lets start with nature.  When bull baiting was made illegal in England, dog fighting took its place.  The favourite dog of bull baiting (the bull dog) was bred with terrier type dogs to make it vicious with other dogs, dog fighting and pit bulls share the same genesis.  But can heritage determine behaviour to the extent that the family pet becomes a killer?  I own a couple of herding dogs.  An Australian Shepherd (sheep dog) and a Blue Heeler (cow dog) who are 10 and 6 respectively. 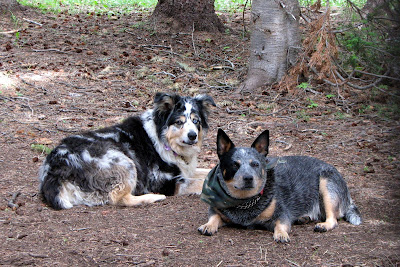 The Aussie wants to herd.  She will often nip your hip or butt and generally try to direct your movement, she crouches and uses her gaze to direct you.  The Heeler will bite your ankles and achilles tendon and attempt to physically direct your movement, often charging and barking in attempts to move you in certain directions.  Not only are these tendencies expressed in behaviour, it is also in their physical make up, the Aussie is lanky for trotting beside the sheep while the Heeler is low slung and muscular to interact with the cattle.  These dogs have never had any herding training, they were bred to herd and it is in their nature.  Pit bulls were designed and bred to kill, it is in their nature.  Not only is it expressed in their behaviour, it is also in their physical make-up, low slung and muscular with incredibly strong jaws for biting down and rending.

On the other hand miscreants and other societal dregs are drawn to pit bulls.  It fits their self image and they train (and neglect) these dogs to be vicious.  If they didn’t have pit bulls then they would migrate to Rottweillers or German Shepherds or some other large dangerous breed.  Vicious dogs are not born, they are created by irresponsible owners.

With some truth in both arguments, what does it mean?  Breed specific legislation will cause the miscreants to migrate to another breed, not really solving the problem; bad people will do bad things.

I think their is a simple two pronged market solution to the issue, with accountability being the linchpin of both.  Firstly, accountability could be ascertained with stiff legal penalties for owners of dogs who act out viciously.  If you act negligently and someone is injured or killed, then you pay.  Educating owners on the nature of their  pets would end the hand ringing and wailing of “I didn’t know” when the neighbour’s child is killed.  Perhaps you didn’t know, but you damn well should have and now you can think about it in jail.  A second level of accountability could be ascertained in an already tried manner, insurance.  If owners of dogs had to obtain liability insurance based in part on the breed of the dog, they could be educated and at the same time would be financially accountable for their dog’s actions.  The setting of premiums would be based on the nature of the breed.  And those who have a history of infringing on others could be prevented from getting insurance and thus from owning a dog.

Not a perfect solution, but in a free society sometimes people get hurt.  While it can’t always be prevented, we can ensure liability and punishment to those who transgress.

John is self employed and lives in mid-Missouri. Born and raised in the Michigan/Ohio border area, he spent 20 years in Berkeley, CA before moving to Missouri in 2014. In his spare time John enjoys hiking, camping, travel, and exercising with his dogs. View all posts by foggytown

John is self employed and lives in mid-Missouri. Born and raised in the Michigan/Ohio border area, he spent 20 years in Berkeley, CA before moving to Missouri in 2014. In his spare time John enjoys hiking, camping, travel, and exercising with his dogs.